On Saturday ashford Boxing Club travelled to Turners Boxing Academy in Camberley, who hosted the National quarter finals of the development championships.

From the off Ewbank looked to see what the Western Counties Champion had to offer, Butterworth came out behind his jab looking for an opening, but Ewbank slipped and weaved nicely avoiding the punches. Catching Butterworth with single shots.

2nd round, Butterworth looked to force the pace catching Ewbank with a couple of nice shots of his own, but Ewbank responded nicely with counter shots.

3rd round, Ewbank with instruction from his corner, dominated from start to finish of the round. Working to both head and body.

This secured Ewbank a unanimous points win and a place in the semi-finals.

1st round, saw both boxers come out strong, exchanging hard shots through out the round.

2nd round, Achong looked to use his jab more looking to create openings against the Western Counties Champion.

3rd and final round, both boxers fought just as hard as they had started, with Achong getting in some telling blows. but having to fight all the way.

Third to box and in his debut in the National Development Championships, Ashford’s Luke Cross (91+ Kg) v Robert Mcintosh of Cheltenham ABC (91+ Kg)

Cross had a big task on his hands as the cheltenham boxer weighed in at 126kg and stood at least 6’4 and good reputation.

1st round, Mcintosh came out behind his strong jab, looking to throw his fearsome right hand. Cross, kept his cool by bobbing and weaving then shipping hooks to the body followed by hooks to the head. Then used good for and head movement to keep just out of range.

2nd round, started pretty much the same, with mcintosh pressing forward looking for the opening, but Cross wisely kept to the good foot and head movement, countering with looping rights.

3rd and final round, the Ashford boxer was instructed by his corner to keep at it. Luke battled to the final bell with the encouragement of his corner and the spectators.

This earned Luke a deserving win, by way of a split decision. This made a very happy day for the Ashford Boxing Club team, with Luke securing his place in the semi-finals. 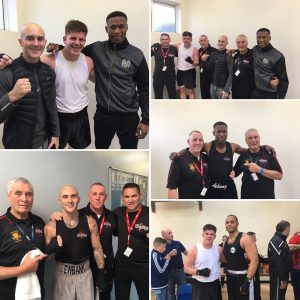 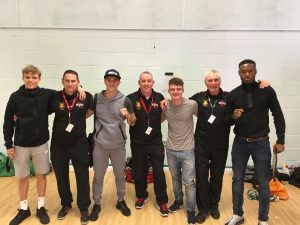 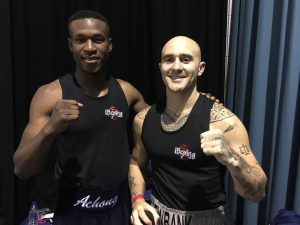 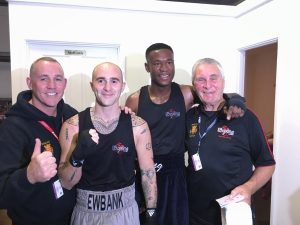 The first round saw the Fitzroy Lodge boxer coming out with all guns blazing and throwing thunderous shots to both head and body. But Jez covered well and replied with some good quality jabs and right hands of his own.

The second round, Jez set the pace shipping his punches to both head and body and then getting safely behind the jab. Jez had to work for every second as the Fitzroy Lodge boxer was hungry to win and had an exceptional support on his own turf.

In the the third and final round Jez was told by his corner that the Fitzroy Lodge boxer was going to come at him hard and with everything. And that Jez must be ready and to move and turn his opponent and then fire his shots. Jez did this with good effect and finished with jabs to keep his man at bay as much as possible.
both boxers fought strongly to the end of the round, trying to gain the advantage.

At the final bell both boxers received a roar of applause for such a good bout.

Both boxers deserved credit. But the Ashford man rightly got the decision by way of unanimous decision. 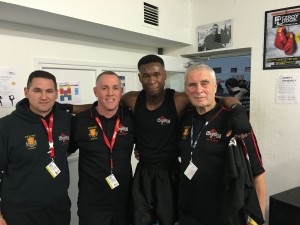