Ashford Boxing Club travelled to Basildon Essex, where 13 year old Jack Stannard made his debut as an amateur boxer. Hosted by Chalvedon ABC Dinner Show.  Jack weighed in at 47kg and his opponent W.Cooper of Chelvedon ABC at 46kg. they  boxed a full 3 one and half  minute rounds. Both boxers came out strong for the 1st round and setting a good pace on there debut. Both boxers finished the round strong with Jack edging the first round. The second round started has stong as the first and this time the Chelvedon boxer taking the round. In the final round both boxers continued the pace, but with Jack being caught with the Chelvedon’s Southpaw lead jab and hooks, catching the judges eyes and winning the round. The bout ended with a thunderous applause for both boxers. The decision was giving to the home boxer and the point score showed that Jack had lost by only 1 point. Head Coach Dennis Jarvis, Andy Wilford and Jamie Carter were all highly pleased with Jacks first performance. 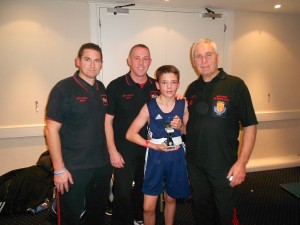 Jack Stannard After his deut bout. 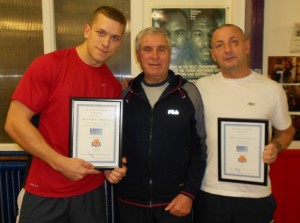 Paul Lewington and Nicholas Mudie receiving the Head Coach award from Dennis Jarvis for there contributions to Charity. Paul and Nick are two serving prison officers who have been training at the Ashford Boxing Club since the early summer. They came to the club and asked if we could help them prepare for the charity bouts they had entered in. Raising monies for the charity Help For Heroes, in association with the Amateur Boxing Association. Both Paul and Nic trained hard for a good six months under the watchful eyes of Head Coach Dennis Jarvis, Jamie Carter & Andy Wilford, whom were all extremely proud of there efforts and the money raised. Well over a thousand pound. Well Done Lads!!! From all the Coaches and boxers of the Ashford & District Amateur Boxing Club.