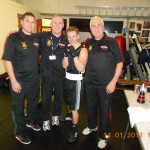 Little John celebrating with his coaches after his debut win

John Weighed in at 57kg against Redbridge ABC’s Leonel Catate who weighed in at 55kg. Both boxers looked to take the lead in the first round with a good exchange of punches, with John connecting well to the body of his opponent. By the end of the first round John had taken the lead and his body shot had taken good effect  on his opponent, sapping his energy. In the second round John was instructed by his corner to cut his man off  and deliver more body punches which were working to good effect. Leonel came out strong, but John cut his man down working his way in behind a good solid jab, then unleashing punishing body shots. With the Redbridge man now tiring clearly and another attack from the Ashford Boxer, the referee stepped in to administer  a standing count, stopping the contest in the Ashford boxers favour. 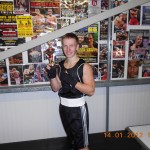 John with his winners trophy