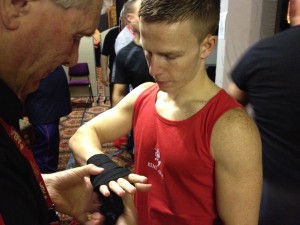 On Saturday 19th of May, Ashford Boxing Club travelled to Leysdown Kent, where Ashford boxer John Holt made his debut boxing for the Kent squad against Scotland.

This was John’s 4th bout to date. After the introduction of both teams John and his opponent Mati fleszar of Doonhammers ABC, where seclude as bout Eleven.

Round 1 saw both boxers starting well and looking to gain the advantage. Mati used his height and reach, whilst John worked well behind his jab to both head and body, then switching his attack with lead and rear hand hooks, catching his man with a solid left hook to break his guard.

Round 2 saw John getting straight back in where he left off moving in well behind his jab, then slipping his opponents attack with good head movement. Mati gamely fought back. But with John growing in confidence blasted in  punishing body shots and several crunching left hooks to the head. This resulted in blood coming from Mati’s mouth and the referee having to clean him up so he could continue.

In round 3 John continued to work behind his jab, then driving home rear hands to the body, then switching back to the head with well placed shots. Mati tried to fend off Johns attacks catching him here and there, but not enough to stave off John’s confidence. At the end of the bout John was deservedly announced the winner by way of unanimous points victory! 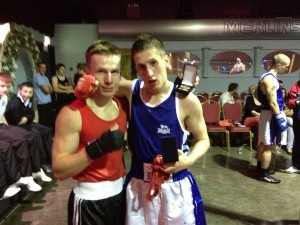 Bradley Ballantyne boxed in the Southern Counties Novice Final at the Lees Cliff Hall on Saturday the 12th May, against Turners Boxing Academy’s Jesse Jones in the 63kg-66kg category.

Both Boxers came out in the 1st round boxing behind there jabs and looking to take the centre of the ring. Bradley took most of his opponents shots on his gloves whilst Jesse looked to counter, with the round finishing pretty even.

The 2nd consisted of both boxers, boxing in the centre of the ring without much interference from the referee. It was Bradley this time looking to counter with a good couple of left hooks, whilst the Turner boxer threw good combinations taking the second round.

The 3rd round, both boxers came out strong, with Bradley working behind his tight guard looking to catch Jesse with his left hooks, has he came in behind fast combinations. This is how the rest of the bout continued with Jesse taking the round being the busiest boxer. This was a clean and tidy final without the referee having to intervene to much. At the end of the bout Jesse Jones was announced as Southern Counties Champion by way of points decision.