All boxers weighed in and first to box was Lenny Wilson, 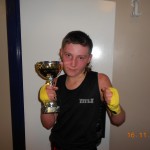 Lenny with his winners trophy.

this was his first bout of the season. Lenny was matched against Folkestone boxer Oakley Weightman. Heart and commitment was out of this world in probably the bout of the night, young Lenny and Oakley Weightman had a toe to toe war. Both lads threw punches with both hands non stop, for the entire bout with neither wanting to give ground. Lenny won by way of a unanimous points win, but young Oakley can hold his head high for his part in a gallant battle.

Second to box and making his debut in amateur boxing Lewis Oleary. 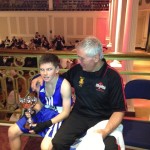 Lewis came out fast and hard from the start, not letting his opponent even get into the bout. By the beginning of the second round the referee stop the contest, with Lewis winning by RSC.

Third to box on the evening was Jack Stannard, who fought Benjamin Chherti of the Maidstone Gurkha ABC giving away height & weight to his opponent. Jack put in 3 good rounds  against  the stronger boxer, gaining valuable experience in his first bout of the season, with Benjamin winning on Points.