Results for Saturday 2nd february at the Westgate Pavilion. 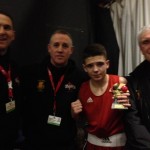 Jack Stannard gets caught with a body shot, 20 seconds from the end of the third and final round, after putting in a terrific performance and ahead on points, against Margate ABC boxer L. Kemp. Jack had put in a good performance against the Margate Southpaw. Both boxers started fast with Jack holding his ground shipping shots to both head and body and catching his opponent with nice uppercuts. This was the scene  through out the bout, until Jack got caught in the solar-plex. The ref gave Jack a standing eight count, but the Ashford boxer was unable to continue, giving the ref no option but to stop the bout in favour of the Margate boxer.

Jasper Smith lost in his debut in the third and final round against Ayleshams B. Axford giving away a massive height and weight advantage. Jasper started the first round well being aggressive taking it to his opponent. By the end of the 1st round the Aylesham boxer had found his range, using his height and reach to good effect. This continued till the third round and three quarter into the last round Jasper took a solid one two combination, with the ref stopping the bout in favour of the Aylesham boxer, by way of ref stop contest. 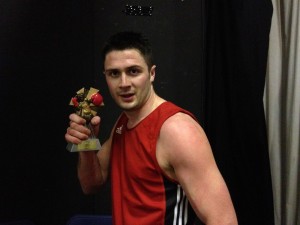 Eddie and his winners trophy.

Ashford’s Eddie Thompson boxed at 81kg for the first time in 20 months against Margate ABC’s Connor Gorman. Eddie put in a good performance after his time out and winning by way of unanimous points victory.The first round saw both boxers trying to work out there opponent. In the second round Eddie had the measure of his man and had caught the Margate boxer with solid shots both on the counter and moving forward. Gorman from this point boxed cagily, and caught Eddie occasionally, but the Ashford boxer fought comfortably through out the bout.