Coaches Dennis Jarvis & Jamie Carter took 8 boxers to the Exeter ABC show, where 6 of them boxed. First up was junior boxer Lewis Oleary in his second bout, winning by way of a unanimous points victory. 2nd on the show was Charlie Smith and making his debut, stopped his opponent in the 1st round. 3rd to box was Shane Smith in his debut, with a 3rd round stoppage. 4th to box was Aharon Achong in his debut, with a unanimous points win. 5th to box was tom Godden losing his debut on points. 6th to box and in his second outing for Ashford ABC Jasper Smith, losing a points decision. And last boxing for Ashford ABC was Eddie Thompson who lost by way of a points decision. All in all Coaches Dennis Jarvis & Jamie Carter were pleased with all the boxers performances. 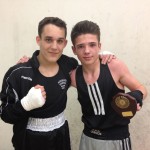 On Sunday at the Tenterden open show, Ashford’s Jack Stannard, boxed a hard fought bout against Sevenoaks ABC Brandon Bennett in the Kent Novice Junior Championships 57kg A Class. Jack just lost out on the title by way of a majority decision.

Tom Venes of Ashford ABC had his 1st taste of amateur boxing, against Tenterden’s Jack Beany in a skills bout. Both juniors boxed to good effect and showed good skills at there current level. Well done lads!