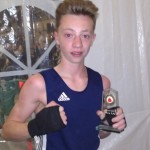 Tom boxed against Tenterden Jack Beaney. Both boxers weighed in at 47kg. This was Tom 3rd amateur bout and had previously boxed Jack Beaney in a skill bout last season. Both boxers fought well in every round showing how close it was with a majority decision being given to the home boxer Jack Beaney. 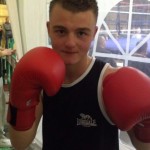 Second to box for Ashford also in his 3rd bout, was 18 years old Charlie Smith.Charlie boxed against Strood’s ABC Sam Pallatt in the 61kg category. Charlie put in a very strong performance in every round gaining himself a unanimous points Victory.