Ashford Boxing Club travelled to Southampton to attend the Golden Ring open show. 1st up was young Logan Carter in his 2nd skills bout and against Golden Ring’s Owen Sherred. Logan put in a good performance against his taller opponent and Southpaw stance. Both promising young boxers boxed well in all three rounds. 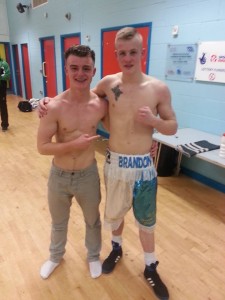 2nd to box, Ashford’s Charlie Smith in his 13th bout to date, against Golden Rings Brandon Thompson. Both weighing in at 60kg and set to do 4×2 minute rounds. The first round saw both boxers battling to gain the edge, with the Brandon taking the lead in the 1st round. With instruction from Head Coach Dennis Jarvis, Charlie was told to up the pace. Charlie came out as instructed moving his head well and shipping punches to both head and body. This continued for the next three rounds with charlie wearing his man down to earn him self a unanimous points win and a roaring applause from the appreciative crowd, to both boxers for a thunderous display. 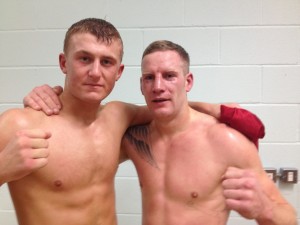 3rd to box, Ashford’s Light-Heavyweight Tony Pluckrose in his first bout in 7 years, against Golden Ring’s Lewie Edmondson.This was also the Golden Ring boxers first bout in a year. Round 1 saw both boxers getting into there rhythm and exchanging punches. Lewie started the second round well behind his jab. Tony shifted in some good body shots, but Lewie had found his rhythm and caught Tony flush with a couple of one two combinations. By round 3 Lewie had established himself well behind his jab, but wouldn’t  stand and trade, as Tony was still strong and sticking in body shots. In the last round Tony took an out count, but still showed his character and strength till the final bell. Tony lost by way of a points decision, but was glad to be back after his 7 year lay off and against a quality opponent.