On Tuesday 22/09/15 Ashford Heavyweight Luke Cross boxed in the Kent final, against Sheerness ABC’s Sam Whealan. This event was held at the Rumbles boxing academe in Sittingbourne. Once again Luke gave away height and reach to his opponent. In round one saw both boxers feeling each other out, with some good exchanges. Round 2 both boxers had there success. Luke with body shots and Sam throwing some effective jabs. The last round saw both boxers from the off working fast and hard, knowing that the Kent title was on the line. Luke worked well to both head and body, Whilst the sheerness boxer threw several right uppercuts off his jab scoring nicely. With a good round of applause for both boxers, the decision showed how closely fought it was by way of a split decision in favour of the Sheerness boxer. Ashford coaches Dennis Jarvis, Jamie Carter and Andy Wilford were pleased with Luke’s performances as this was his first attempt at the senior novice developmental championships.

On Saturday 26/09/15 Ashford Boxing Club travelled to the Golden Ring Gym in Southampton, who who held the next stage of the Southern counties championships Kent v Hampshire. Kent champions Charlie Smith & Jack Ewbank both boxers weighed in good, in there categories. Charlie in the Under 60kg and Jack in the under 69kg.

First to box in a supporting bout and his 1st contest, was Ashford’s junior boxer Logan Carter v Golden Rings Owen Sherred. 1st round saw young logan take the initiative against his southpaw opponent forcing the pace and working well to both head and body. 2nd round Owen fought back catching logan with his lead hand hooks and straight backhands. Making them both even at the stage. 3rd round saw Owen pick up were he left off scoring well and keeping logan at bay. When logon did get close he score managed to get in a good couple of uppercuts followed by left hooks. Both boxers fought gamely, but he decision was given to the home boy by way of unanimous decision.

First to compete in a 3 x 2 minute championship rounds was Jack Ewbank against Golden Ring’s Adam Birch. With a good foot in height difference, Jack was not going to let this deter him from securing a place in the southern counties final. Jack came out in the first round picking his opponent off, making him miss and punishing him for his mistakes with clean crisp punches. 2nd round saw Jack mix it up both in and out of range, weaving in and out under the long reach of Sam and only catching the odd shot himself. The 3rd and final round Jack was instructed by his corner to stay close and not give the Golden Ring boxer any space. Jack carried out his instructions, forcing Sam on the back foot, slipping and turning, then throwing off two and three punch combinations. Sam had some success with the occasional right hand, but not enough to deter Jack in winning. After the final bell 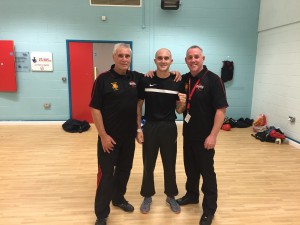 Jack was awarded a unanimous points win and secured his place in the Southern Counties Final. To be held on Saturday 3rd October at

Second to compete in a 4 x 2 minute championship rounds was Ashford’s Charlie Smith, against Golden Ring’s Jake Clarke. From the off Charlie went straight in, but the Hampshire champion used his height and reach well to his advantage. Using his jab well and not letting the Kent champion get set. Charlie bob and weaved well, but jake just stayed out of range making hard for charlie to get his shots off. The 2nd round saw the Hampshire champion switching stances, piercing out his jab followed up by combinations and countering Charlie on the move. In the 3rd round Charlie had some success when scoring well to the body. Jake took them well but soon moved off the ropes to counter effectively. In the 4th and fianal round Golden Ring’s champion was full of confidence, slipping and turning and shipping punches at close and on the out side. Jake had to stay focused at all times, as Charlie fought gamely to the final bell. 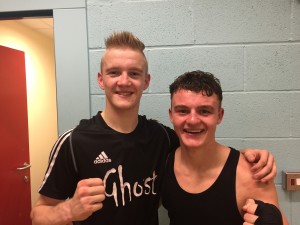 There was a roar of approval from both set of supporters, for Jake’s slick boxing and Charlie’s tenacious effort. Then by way of unanimous decision, Jake secured his place in the Southern Counties Final. 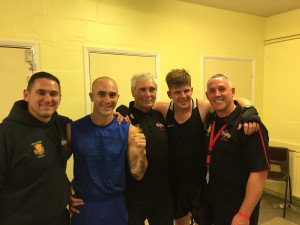 After the initial weigh-in held at the Ashford club on Friday 11th September, Jack entered a straight final against Gravesham’s ABC Tevin Gibbons. Jack gave away height and reach, but used this to his own advantage. The Ashford boxer sleep in and out picking his shots well and not letting the Gravesham boxer settle or find his range. Jack hit hard to the body when the opportunity showed, adding more frustration to the the Gravesham’s boxers night. This continued through out the duration of the contest, earning Jack a unanimous points and the Kent championship title.

Luke was drawn against Ben Axford of Aylesham ABC in the semi-finals of the championships. Luke also gave away a big height and reach advantage. But like his stable mate used this to his advantage. Luke set off strong and sharp letting Aylesham boxer Know he was in for a tough night and that he was eager to cement his place in the Kent Final. To be held on Tuesday 22nd September at Rumbles ABC in Sittingbourne. The 1st round saw Luke dominate with solid shots, to both head and body and not letting his opponent work at his own range. Every time the Aylesham boxer tried to keep it long, Luke closed him down and hit hard. The second round saw both boxers getting straight back into it and again Luke forcing the pace, with Ben trying hard to establish his jab and getting a good couple of straight rights. In the 3rd and final round Luke was instructed by his corner to keep up the pace and pressure. Luke did this with good effect shipping punches to both head and body, all the time whilst the Aylesham boxer was also getting some good shots off. By the the end of the round both boxers had given there all in what could have been a final. The winner of the Kent championship semi-finals and through to the next round by way of a split decision was given to Ashford boxer Luke Cross.