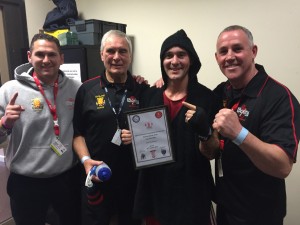 From the 1st round Jack held the centre of the ring, even though Jordan had height and reach advantage over Jack. Jack slipped Jordan’s long Jab with ease and countered with his own jab nicely. Followed by a straight right, then a left to the body. Once Jack had finished his own attacks, he slipped out of Jordans range to good effect. On the inside Jack worked well to both head and body, making Jordan looking to try and tie Jack up. But Jack wasn’t having none of it, working his way free. Only at the end of the round Jack was caught with Jordan’s left hook, that he’d missed so often, but this had no effect on Jack.

The 2nd round, Jack was instructed to put more pressure on the Frome boxer and to keep countering the jab. Jack followed the instructions well, then dropping shots to the body, forcing Jordan to try and tie Jack up again. Jordan tried to catch Jack with uppercuts on the way out, but jack was to evasive for the Frome boxer. The round finished with Jack putting in quality punches and starting a bleed from the Frome boxers nose.

In the 3rd and Final round, Jack was told by his corner to stay focused and to keep up with the good work. Jack dominated the centre of the ring, slipping and countering, then putting Jordan on to his back foot. Again he tried to tie Jack up, but by this time Jack had his opponent completely worked out and was picking his punches well, forcing all the exchanges to his own advantage and finishing the bout as strong as he had started.

At the end of the contest Jack was announced national development quarter finalist winner. This was a massive win for Jack as Jordan Giles had brought an impressive 11-0 record to the championships. 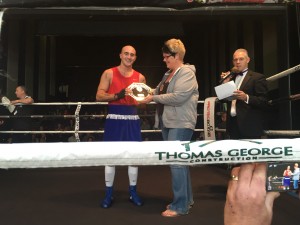 On Saturday 3rd October, Ashford Boxing Club & boxer Jack Ewbank attended the Southern Counties final. Held at The Royal Harbour Academy, Upper School, Stirling way, Ramsgate, Kent. Jack had reached this stage by firstly winning the Kent title and then winning the Kent v Hampshire round (Southern Counties semi-final) In the final Jack was up against Mohammad Yasin of Woking ABC’s. Round 1 saw both boxers start with caution and trying to draw each other in. Jack led and countered with some rear-hand straights followed by sharp left hooks. Mohammad tried to respond, but Jack slipped and rolled well to nullify his counters. The 2nd round saw Mohammad trying to set the pace, but Jack threw out his jab effectively, followed by straight rights to the body and left hooks to the head. Mohammed had a couple of successes but none that took any effect on Jack and his confidence. In the 3rd and final round of this 3×2 minute championship final. Both boxers went straight in with Jack getting the better of the exchange, landing a nice left hook, right uppercut, left hook combination. Jack’s lead left hook was now finding his opponents chin nicely. Followed by rights to the body, then switching back to a double left hook to the body then head. Jack had now got Mohammed on the back foot until the final bell. This was to gain Jack a unanimous points win and Southern Counties 69kg Championship. Jack will now box in the next round Southern Counties v London Counties, the weekend 17th October. 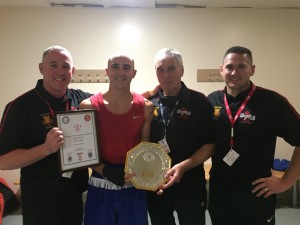