First to boxed was Jez Achong 76kg against Putney & Roehampton boxer, Nick Tanathat 77kg. Both boxers started fast and strong, Achong behind his fast jab and one-two combinations.  Tanathat slugging his way in behind long hooks. Achong was caught with a big right hand, but came back hard and fast and finishing the round with solid jabs.

Second round saw the Ashford boxer, get straight back to work behind his solid jabs, then switch his attack to the body. The Putney & Roehampton boxer got in a couple of body shots himself, missing most with his swinging shots.

Third round saw Achong, moving both head and feet with more confidence. Picking his man off with speed and accuracy and having complete measure of his man. This resaulted in the Ashford boxer securing his debut performance with a unanimous points win.

Second to box was Matt Creighton, 67Kg Against Putney & Roehampton’s Teejan Barrie 68kg Creighton got straight to work behind his jab, whilst Barrie tried stepping back and countering with big shots. Matt covered well and came straight back. With 30 second left of the 1st round, in an exchange of punches, the Ashford boxer took a solid right hook from the Putney & Roehampton boxer. Leaving the ref to administer a standing eight count. After the count Creighton fought gamely till the bell.

The second round saw Barrie trying to use his power to dominate and take out the Ashford boxer, but Creighton dug deep and kept pushing out straight one-two combinations through out the round.

In the 3rd and final round, the Ashford boxer threw two and four punch combinations down the middle, then worked the body. Barrie was now trying to hold, but Creighton turned his man well in the corner and followed with a right, left, right combo. Barrie was now showing signs of fatigue and when the ref split the two boxers. Barrie was clearly exhausted. Matt finished the round with two solid right hands. Both boxers had fought to a near stand still. Creighton had showed pure grit and determination in his debut bout and got his boxing off with a unanimous points win. 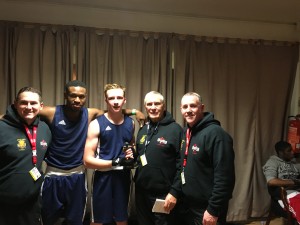 Boxers Jez and Matt with there coaches.