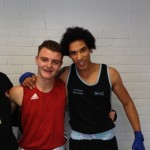 Ashford’s Charlie Smith v Whitstable ABC Jaz Gayner, in the  Semi-Final of the Kent Novice Championships held by Turners Boxing Academe. These two boxers had met previously last season and was a thriller. And they did not disappoint this time. Both boxers gave there all exchanging blows through out every round. Charlie looking scoring to the body, then left hooks to the head and  Jaz sticking behind his jab and firing off upper cuts and hooks.This could of easily have been the final. Jaz was awarded the decision and both boxers received a show of appreciation from the crowd, for a fantastic bout.