1st to box and making his debut for Ashford and boxing a skills bout was Logan Carter. Logan gave away a year in age and a kilo in weight, to Hassan Nadden of the Dale Youth boxing club.

Three 1 minute rounds with a 1 minutes rest between the rounds was a requirement for this skills bout. Both boxers came straight out at the sound of the bell to the centre of the ring, eager to show what they had learnt at there clubs. Throughout the whole 3 rounds both Bailey and Hassan gave a good account of them selves and showed promising skills and talent for the future. 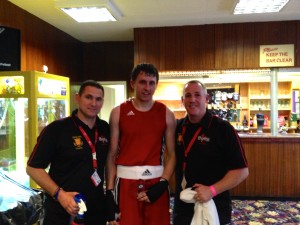 2nd to box Ashford’s John Evans v Daryl Stannard of Horsham ABC. This was a light heavyweight contest, with the Ashford boxer giving away 3kg in weight.
The 1st round started with the Horsham boxer coming out very strong solid hooks to both head and body, trying to over power the Ashford boxer. But Evans pushed out his jab and the odd one-two combination until he weathered the storm. By the end of the first John new this was going to be tough till the end. In the 2nd round the Horsham boxer came again and pushing John hard. Half way through the round John caught his man with a cracking right uppercut, slowing the Horsham boxer down till the end of the round. The 3rd and final round saw both boxers give there all. In the mix of some good exchanges John threw another cracking right uppercut that had his opponent on the back foot, but John just didn’t have the energy to follow up and at this stage both boxers were sapped of all there energy. At the final bell both received a thunderous applause whilst waiting for the result. It showed what a hard fought contest it was  by way of a split decision in favour of Horsham’s Daryl Stannard. 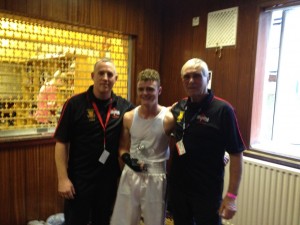 3rd to box Ashford’s Charlie Smith v Zephaniah Saif of Marlowe ABC.
The 1st round saw Zephaniah come out behind his southpaw jab, but Charlie moved his head well slipping his opponents jab, countering with a straight rights to the head followed by a hurtful left-handed body shots. Charlie continued this assault for the next 2 rounds, as wells delivering good jabs to Zephaniah head and body. This was Zephaniah 1st bout in three years. But showed strength of character how he dug deep to last the distance. Charlie was awarded a unanimous points victory and both boxers received good applause from the crowd for there show of boxing.