Friday 14/11/2014 Ashford Heavyweight Luke Cross, put on a strong performance in his second outing boxing in Deal on the Aylesham open show. Boxing captain Broughton of the Royal Marines. Luke gave away height & reach and made his opponent work hard for the full, three 2 minute rounds to gain a points win over Luke.

Saturday 15/11/2014 Ashford’s Danny Bull aged 12 years of age and boxing at 42kg in his second outing for Ashford, boxed against Mitchell Tindell of Rumbles Boxing Academy at the Rumbles Boxing Academy show. The first round saw Danny come out and catch Mitchell with a solid jab and dictating the centre of the ring. Danny proceeded to box strong and picking his shots as Mitchell tried to move in. The second round saw Mitchell try to start fast but Danny maintained his boxing. Working well off his jab and taking advantage of his longer reach. The 3rd and final round saw both boxers giving there all and exchanging combinations, making it a very tight round. At the final bell the boxers received a well deserved round of applause for there performances, with Danny being given the win by way of a majority decision. 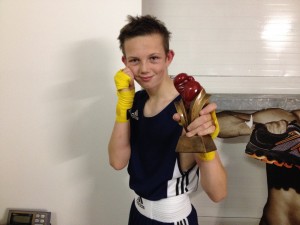