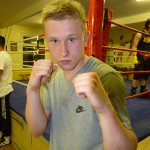 This was Steve’s 3rd bout of the season. Steve and Adam both came out from the start strong and looking to put on a good performance. Adam looking to use his height and reach, whilst Steve used plenty of good head movement to avoid the punches. Both boxers  used there jabs to good effect, with Adam slighty edging the 1st round. Atfer instruction from his corner, Steve came out for the 2nd round to counter well to the body, then switching attack to his opponents head,  using short 3 punch combinations to good effect. With Steve edging the 2nd round. Steve came out for 3rd and final round knowing he had to finish strong to get the decision on an away show. He forced the pace and his opponent onto the back foot catching him with good quality combination, with Adam catching Steve on the way out with some good short left hooks, making it still a very close and tidy contest. Before the decision was given the referee wanted a good round of applause given to both boxers for there outstanding level of boxing and a well matched contest. To show how close the contest was Steve was announced the winner by way of majority decision.